David Li will be teaching the Specialization Track on ‘BRICK BY BRIC: DIY innovation in emerging economies’ on July 25 at the TFF Academy. 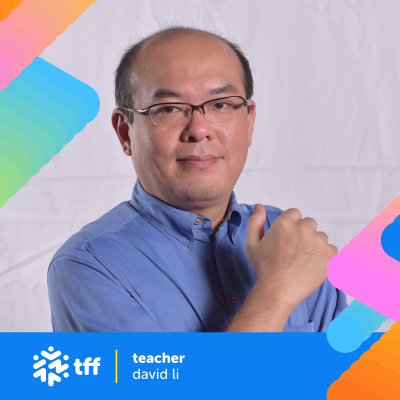 David Li has been contributing to open source software since 1990. He is member of Free Software Foundation, committer to Apache projects and board director of ObjectWeb. In 2010, he co-founded XinCheJian, the first hackerspace in China to promote the maker culture and open source hardware. After co-founding Hacked Matter, a research hub on maker movement and open innovation. In 2015, he built Maker Collider, a platform to develop next generation IoT from Maker community. With his work at the Shenzhen Open Innovation Lab, he helps facilitate the collaboration between global smart hardware entrepreneurs and the Shenzhen Open Innovation ecosystem.

You’re said to be one of the first advocates of the maker movement. Tell us about yourself, your mission with your work and how it’s connected with TFF?

It all started when I co-founded Xinchejian – the first makerspace in China in 2010. But that emerged more out of personal interest. Then, in 2011, I co-founded Hacked Matter with Dr. Silvia Lindtner and Dr. Anna Greenspan. In this research hub, we looked at how open-sourcing technologies and knowledge might accelerate innovation from the bottom up. Our findings took us to Shenzhen, where open technologies empowered the masses to innovate and transform the cluster of 15 sleeping fishing villages to a mega city of global innovation hub in merely 30 years. So I co-founded Shenzhen Open Innovation Lab with SIDA (Shenzhen Industrial Design Association) and Maker Collider with the support of the Shenzhen Government to promote this „Shenzhen-style“ open innovation approach to the new entrepreneurs around the world.

The new open innovation world we are in today can be seen as abundance of open knowledge, open technologies and open production that anyone can leverage. In this new paradigm, impactful innovation will happen at the bottom and scale horizontally instead of happening at the top and trickle down.

It gives advantages to innovators who are trying to solve real problems. And there is nothing more real than food security issues, where we particularly need bottom up solutions. We have already seen negative examples of how companies act when given global dominance in the tech industries. We can’t afford to have this in the food sectors. Thus, we are excited to work with TFF to bring the resources of Shenzhen to their community and help projects develop faster and scale better – based on the open innovation approach.

Which driving forces do you consider most impactful regarding an economic shift towards openness, collaboration and sharing?

Successful innovation requires access to knowledge, technologies and production. Traditionally, these three forces are concentrated in singular hotspots around the world such as Silicon Valley. However, after two decades in the digital age, open sources and open productions in China, we have arrived to a new stage where abundance of knowledges, technologies and productions are available to most people everywhere. While the reality of the world has moved to a new open paradigm, the perception is still stuck in old proprietary models, also with startups, who are reluctant to share and collaborate.

We need more organizations like TFF and SZOIL to promote and drive the sharing and collaboration among startups in order to help them leverage the new world of abundance in open knowledge, technologies and production.

How might emerging tech leverage a new, more open age of food and agriculture?

In order to make impact, we should pay more attention to not just emerging tech at the cutting edge but also in the trailing edge. The trailing edge technologies are those, that have already survived the hypes and are about to take off on scale. That’s where next-generation entrepreneurs in the space of food and ag should be focusing on.

Could you share a little teaser of your Specialization Track on ‚Bootstrapping and Hacking Food and Ag‘ at the TFF Academy 2018?

I am looking forward to presenting the open ecosystem in China and working with teams in the track to examine and identify the trailing tech for food and agriculture, and how to take advantages of them to advance projects.

Curious to learn more from David Li and his experiences with open innovation? Join the TFF Academy and TFF Summit this July in Rio. Check details here.