A guest post by John Cumbers, Founder and CEO of SynbioBeta.

John Cumbers will be teaching the Specialization Track ‘The Frontiers of Synthetic Biology’ on July 26 at the TFF Academy. 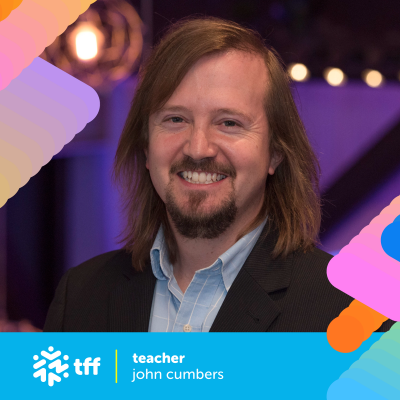 John Cumbers is the founder and CEO of SynBioBeta, a global innovation network and community of entrepreneurs, thought-leaders and investors. He is the co-author of “What’s Your Bio Strategy?” a book on the impact that synthetic biology is having on all business. John has been consulting to leading companies and investors on the impact of synthetic biology for over a decade and has received multiple awards and grants from NASA and the National Academy of Sciences for his work in the field.

A super connector, John has devoted himself to helping those around him connect into the synthetic biology ecosystem and gain the resources that they need to break through scientific and commercial boundaries and see their innovations applied in the real world.

These efforts are not only potentially profitable, but less environmentally harmful than conventional means of food production. Thus, synthetic biology could not only disrupt the world’s largest commercial sector, but also quietly revolutionize how we interact with the natural world. Here, we’ll meet three companies — all of which will be represented at SynBioBeta — that epitomize this approach.

The Reinheitsgebot (German Beer Purity Law), which recently celebrated its 500th birthday, specifies that beer can be made of only barley, hops, and water. The 16th-century Bavarians didn’t know anything about yeast, the microbe that ferments the barley. Given that, what’s brewing at Berkeley Brewing Sciences would really have blown off their Lederhosen: modifying yeast so that hops are no longer necessary.

BBS metabolically engineered brewer’s yeast to synthesize the aromatic compounds present in the essential oils of the hop flower. The altered strain serves double duty during brewing, fermenting sugar while flavoring the final product—giving new meaning to the term “microbrew.”

“It’s a true drop-in replacement,” explains co-founder Charles Denby. “A brewer could get rid of their old yeast and add our yeast,” avoiding the need to add hops at the end of the brewing process.

«Na und?» our ancient Bavarian Meisterbrauer might ask. «Was ist das Problem mit Hopfen?» First, hops are resource-intensive, requiring 50 pints of water to grow enough flowers to flavor one pint of beer—that’s 100 billion liters a year, not counting the energy, fertilizer, and transportation infrastructure required to pipe in all the water and truck away all the hops.

Hops are also inconsistent, with the components of the essential oil varying significantly from crop to crop. The scientists at BBS solved this problem by precisely engineering yeast’s metabolic pathways to produce just the right levels of terpenes.

BBS has not yet partnered with a major producer to sell hop-less beer fermented with its new yeast, so it might be awhile before we taste our first MGD (Miller GMO Draft). Currently, Denby says, “we’re focusing on making awesome products that brewers will want, and then commercialize from there.” But recent taste tests at Lagunitas Brewing Company clearly show that the industry is interested.

What’s next? Denby sees limitless potential for metabolic engineering of yeast: “Yeast already has a lot of tricks up its sleeve, and it already makes a rich and complex beer. More metabolic engineering will give us a richer beer, and that can be further refined.” Moreover, the general approach could be applied beyond brewing to any consumable that requires molecular enhancement.

However, most people don’t drink beer every day, but they almost invariably consume something sweet. That’s why we’re enthusiastic about a company that is developing another microbially produced flavoring agent, this one targeting the $3 billion market for high-intensity sweeteners.

Amai Proteins, based in Israel, is commercializing peptides that taste like sugar but are digested like proteins. The consumer benefits are immediately obvious: Sugar damages human health by promoting obesity and diabetes, and many synthetic sweeteners pose health risks of their own or have off flavors that discourage wider adoption. By contrast, Amai’s compounds contain negligible calories and don’t activate the insulin response.

The sweet peptides are based on naturally occurring plant proteins modified by a method called Agile Integrative Computational Protein Design (AI-CPD), a field in which founder Ilan Samish has done extensive academic work. This technique can be used to optimize commercially important features of a protein (e.g., stability, solubility, and shelf-life) while preserving or improving qualities of interest (in this case, sweetness).

The computationally tweaked proteins are expressed in a type of yeast. Although these microbes are technically genetically engineered, the desired products can be purified and legally sold as non-GMO. Once the manufacturing details are resolved, the company hopes to have a product in a premium market within two years.

And as with BBS, Amai’s overall strategy is not limited to one gustatory property. “There are numerous proteins in food that can be modified quickly using AI-CPD,” Samish explains, anticipating much broader application of these principles to food science. “In general, making healthy food for the general population requires higher yields and stability, which can be offered via synthetic biology.”

Fungus for our best friends

Food additives constitute only a small fraction of what we eat and drink. But what if we could harness the power of microbes, not merely to flavor or modify existing food, but to make the food itself?

One exciting effort in this direction is targeted not at humans but at our companion animals. Wild Earth, another Berkeley-based company, is reinventing pet food from the ground up, using a filamentous fungus known as koji to build protein from scratch. Koji serves as the basis of Japanese fermentation, giving us products as diverse as soy sauce, miso, and sake.

In contrast to the way those foods are made, however, Wild Earth does not use grain as a feedstock. Instead, they provide their koji with the simplest biochemical building blocks: beet sugar, hydrolyzed yeast extract, and even a bit of fertilizer.

“Essentially,” says co-founder and CEO, Ryan Bethencourt, “we want to create a protein source from the basic elements.” The company’s scientists screened sixteen different koji strains before they found one that grew well in this simple nutrient broth. “We wanted koji that we could brew well, using minimal feedstock to make it cost-competitive.” he continues.

In home tests so far, the company’s early products have received rave reviews—but as dog lovers know, our canine companions do not have the most discriminating palates. Dogs will eat anything, right?

Well, sure, they will, but it doesn’t mean they should. Much of today’s pet food is simply not what you’d want to feed your best friend: pet food manufacturers use parts of agricultural animals not considered fit for human consumption. This is less true of premium brands, but to the extent that those are made of healthier and more palatable ingredients, they are just as resource-intensive and potentially environmentally damaging as the meat we humans eat.

“In the past, we thought of pet food as a waste product,” Bethencourt explains. “But when I looked into the mid-tier to premium pet food, where meat is being purpose-grown for consumption by dogs, I learned that one-third of the meat we consume goes to pets, and at least half is not waste product.”

Onto this bleak landscape steps Wild Earth, with a solution that is both healthier than standard chow (in that it is well-defined, free of nasty bits, and incidentally vegan) and less environmentally intensive than premium haute cuisine pour chiens. Simply put, Bethencourt says, “Our goal is to use science to make the best pet food on the planet.” They plan to launch commercial treats in October of this year, and a dog food early in 2019.

Once commercial production is underway, what’s next? Bethencourt is already thinking beyond the nearly hundred million dog dishes in the US that could someday be filled with Wild Earth chow. “All animals need nutrition. Once we’ve shown we can make high-quality clean protein for pets, what’s to stop us from making great food for humans?”

Fungal production of protein from well-defined and easily standardized feedstocks could help address supply chain issues in emerging markets, as well as food security and fraud issues in developed nations. “Ultimately,” he predicts, “we could feed billions of people and billions of animals.”

One might be reminded of the science fiction series “The Expanse,” in which the self-reliant Belters of the outer solar system eat a fungally synthesized kibble.

“Yes!” laughs Bethencourt in response, who is also a fan of the show. “We would love to be the people who supply humans with proteins as we leave Earth and start living in space.”

Space is as good a place as any to end our discussion of synthetic biology in food. With tools and techniques that are capable of improving human and animal health, protecting our environment, and changing how we eat and drink all around the world, it’s clear that not even the sky’s the limit.

Curious to learn the about the fundamentals of synthetic biology, state-of-the-art applications, investments and methods to engineer biological systems? Join this Specialization Track with John Cumbers at the TFF Academy this July.