A conversation with Henry Gordon-Smith, Founder and Managing Director of Agritecture

Henry Gordon-Smith will be teaching the Specialization Track ‘Smart Cities and Smart Agriculture’ together with Maeva Dang, on July 23 at the TFF Academy. 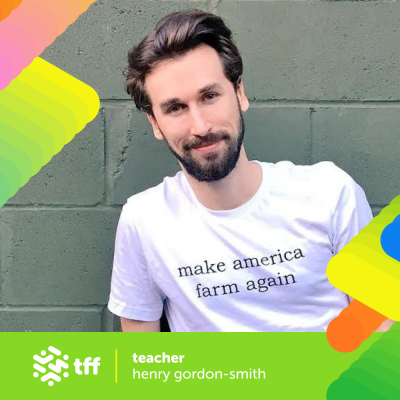 Henry is a sustainability strategist focused on urban agriculture, water issues, and emerging technologies, and a Co-Founder of the Association for Vertical Farming. Three years ago, he launched his company Agritecture Consulting, a global urban agriculture advising firm that helps entrepreneurs start their own farms, consults with cities on urban agriculture planning, and organizes conferences and Agritecture Workshops around the world to bring interdisciplinary groups of individuals together.

Growing up in cities around the world, including Hong Kong, Tokyo, Frankfurt, Prague, Moscow, and Vancouver, Henry took on the opportunity of exploring and developing creative solutions to both local and global problems.

As a natural visionary with a strong entrepreneurial mindset, he soon felt limited in his creative spirit during his political sciences studies. After college, Henry started searching for opportunities around environmental security, where he got directly in touch with local farmers who would share their challenges and successes with him.

As a result of these conversations, Henry sensed a large potential to develop disruptive business models that would enable a different approach to growing food for urban populations. So, Henry created the blog Agritecture.com, where he openly discussed his vision for the future of urban agriculture and why it interlinked so importantly with mega trends of urbanization and climate change.

In 2013, Henry bought a one-way ticket to New York City for a job interview with Bright Farms, a hydroponic greenhouse company. Despite getting rejected from that job opportunity where hard skills mattered more than his passion and purpose, he wouldn’t get overwhelmed by frustration and give up. Instead, Henry volunteered at greenhouses and urban farms, while searching desperately for a job in the emerging field of urban agriculture.

Eventually this led Henry back to school where he completed a MSc in Sustainability Management at Columbia University. During all this time, Henry continued to build the audience for his blog, which soon became one of the most popular blogs on the topics of urban agriculture and vertical farming.

Henry received constant inquiries from hopeful urban farming entrepreneurs through his blog presence, so he decided to turn his passion into a full-fledged consulting business. It’s like the saying: good things take time to ripen – and in Henry’s case, his perhaps ‘unusual’ path eventually led to him become a leading consultant and thought leader in the field.

In developed nations, traditional agriculture takes place outside of the city. However, as Henry states, if you look at the global picture it turns out that over 800 million people are already involved in urban farming. The recent shift towards urban agriculture in countries such as the U.S., Japan, and Germany is really just a return to what is actually a well-established method of effectively providing a nutritious and resilient food source to urban populations.

“I believe that urban farming as a movement enables more creative solutions and inspires motivation and inventiveness. Right now I see constant innovation happening in this space, which is quite exciting, as it’s ultimately a driving force of how we want to build more resilient cities and a more sustainable food system.”

That being said, Henry adds, urban farming alone doesn’t solve all the problems modern cities are facing. Yet it is a valuable and relevant contribution towards moving our cities forward in a more sustainable and resilient path.

At the moment, according to Henry, indoor farming has a number of key issues that need to be addressed to make it a truly sustainable model for urban agriculture. These challenges include the high energy usage of LED lights, high initial capital costs to build the farms as well as the limitations of crop diversity in these sorts of growing systems.

High-tech greenhouses, for example, could be a potential way around these issues in some areas, as they’re able to capitalize on natural sunlight.“Greenhouses might not be as sexy as vertical farms, but with a lower capital cost and plenty of room for innovation and improvement, they should be more appealing to entrepreneurs interested in supplying food to cities of the future,” Henry says.

Another major benefit of urban agriculture that Henry sees is its ability to capture the untapped potential of tomorrow’s farmers. The current age of the U.S. farmer is 58.3, and that number is sure to keep rising. To Henry, the role of urban farming goes beyond being an alternative farming method to also being a source of inspiration for young people who want to make a difference in the world especially in the realm of sustainability and food.

“It’s about time,” says Henry, “to face the challenges posed by the ever increasing age of our farmers – and to shift our focus towards urban spaces that are capturing the imagination of the next generation of farmers.”

Curious to learn more about the future of urban agriculture from Henry Gordon-Smith and his co-teacher Maeva Dang? Join them as they lead you through a scenario analysis of the next five years and provide lessons learned from Rio’s local agricultural space at the TFF Academy Summit this July.