About 45% of the world’s fruit and vegetables are wasted, resulting in economic losses ranging from $10 billion to $100 billion globally. Soft rots caused by bacterial pathogens cause more crop losses than any other disease. What if we could make crops immune to soft-rots by targeting the bacteria that causes them with its natural predator: phages.

Meet COMBio, our TFF Finalist from Malaysia. They have developed an AI-powered phage discovery platform and microbial pesticide product that provides precision protection against soft rot diseases across the value chain. 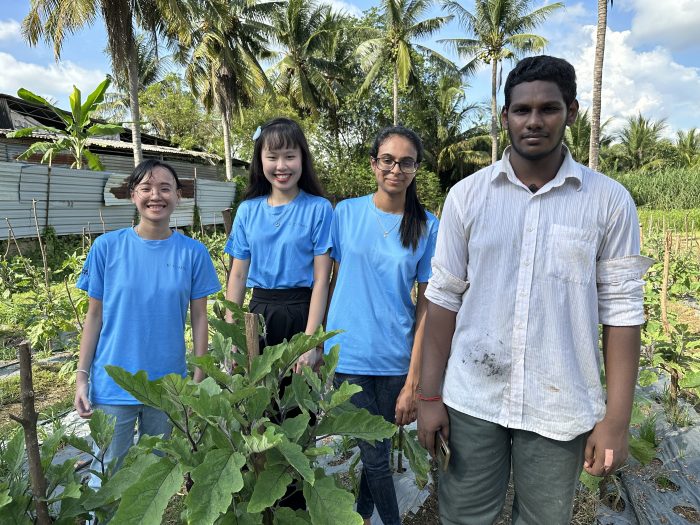 Bacteria may be tiny, single-celled microorganisms 🦠, but their impact on food and natural systems is outsized. Many types of bacteria live on plant surfaces or inside of them. Sometimes they do good by propelling plant life through symbiosis, but they can also do immense harm by causing plant disease and death.

A group of bacterial pathogens like Dickeya, Xanthomonas, Erwinia, Pectobacterium, and Ralstonia are some of the bacteria “bad guys”. They cause soft rot in fruits and vegetables, resulting in damage to crops in the field, as well as after harvest when food is in transit, storage, or being sold at the retail level. You can tell when soft rot strikes as it makes fruits and vegetables mushy, wet, and smelly.

It is estimated that soft rots cause yield damages of up to 30% globally. In Malaysia alone, more than 1.2 million tonnes of rotten food end up in landfills yearly, with ⅓ destroyed by harmful bacteria. This is a tragic situation for farmers , food security, and our climate.

Current methods to prevent or combat soft rots aren’t ideal. They typically involve using antibiotics, which risks the emergence of antimicrobial-resistant (AMR) microbes, or applying harmful chemicals that can have negative impacts on human and environmental health. The COMBio team witnessed this firsthand when they worked on farms across Malaysia and Southeast Asia. Time after time they saw farmers taking extreme measures to prevent crop losses by spraying synthetic chemicals at dosage rates that were too high or without using the right personal protective equipment. This is what motivated this group of passionate scientists to find a better way. 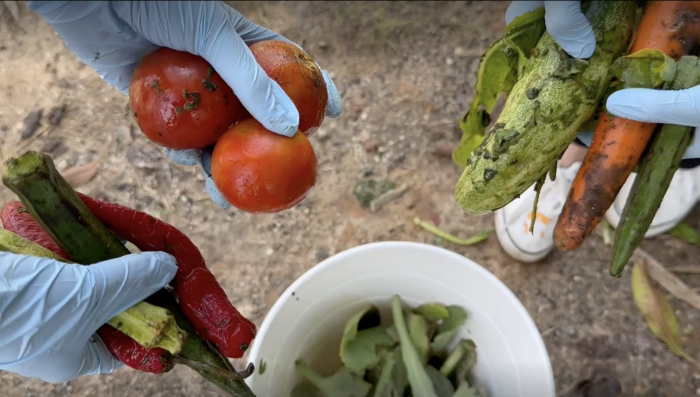 Bacteriophages – or phages – are viruses that are the natural predators of bacteria. They are the most abundant organisms on the planet, and if carefully selected, can do a lots of good. Although mostly safe, these viruses have to be screened thoroughly. On rare occasions, there could be some phages that may possess unwanted traits that would make them unsuitable for use. That’s where COMBio comes in with their AI-driven phage discovery platform to help find the good ones that can be used for safe and successful application. These well-screened phages can be used across a range of fields – from healthcare, to food, to agriculture – to create an arsenal of safe and natural alternatives to chemicals and antibiotics.

This team has developed safe, sustainable, natural, phage-based biopesticide formulations targeting soft rot diseases in crops. They use microbiology techniques and bioinformatics machinery to scan soil and water samples to identify promising phage candidates. To date, the team has analyzed hundreds of hectares of land across Malaysia, and compiled a library of more than 100 phages – 31 of which can be used for soft rot treatments.

Once these phages are identified, they are able to isolate and replicate them and turn them into biological microbial pesticide cocktails that are incredibly easy to use: all someone has to do is reconstitute the phages in water and spray them onto infected plants to both treat and prevent soft-rot infections.

The good news is that these phages will not harm anything other than the harmful bacteria that they target. They are, in the words of COMBio, “Pathogen Specific phages” – and that is why they name their product Phage-cific. That means that they do not disrupt soil ecosystems and do not affect humans or animals that consume them. Phage-based pesticides are certified as Generally Recognized as Safe (GRAS) by the FDA in the US and can be used on ready-to-eat foods.

COMBio’s phage formulation targets the whole spectrum of bacteria responsible for soft rot diseases. Their phage formulations can drastically improve the effectiveness of bacteria control schemes while also improving the overall industry sustainability. Once available in the market, COMBio’s solution could be a breakthrough for the agricultural and food processing industry, avoiding food losses of billions of dollars annually.

COMBio’s product is among the first in the ASEAN region to be tested in the field to combat soft rot pathogens in plants, as well as for post-harvest use on vegetables and fruits.

Their solution is suitable for indoor and outdoor farming – an important sector in their home-base of Malaysia. Malaysia’s food and agricultural industry accounts for 10% of Malaysia’s GDP, with a value of over $4.56 billion. The sector employs 10.9% of the rural population, mostly food producers and distributors. The loss of Malaysia’s agricultural produce to soft rot is between 17-30%, so imagine the increase in profits if that loss can be significantly reduced.

Their product is in line with the global focus which is shifting to bio-based solutions in agriculture. The global microbial pesticide market is valued at $4.75 billion and Asia represents half of the target market. The team targets to capture 5-10% of the Southeast Asia market for microbial pesticide by 2027.

The team has tested their formulated phage mixtures on infected plants and post-harvest vegetables, in laboratory as well as field settings with great success. Tests show that it can completely prevent disease development as well as stop disease progression in the treated plant.

COMBio aims to provide farmers – especially smallholders – and agri-food logistic organizations with a convenient, safe, and sustainable solution to tackle this monumental issue. Not only avoiding food losses, but COMBio’s phages can drastically improve rural communities’ livelihood conditions by generating additional food and income, and guaranteeing healthy work and environmental conditions for farmers and farm workers.

Phages have the power to target agricultural problems like pests and diseases in a highly-specific way. COMBio is continuing to improve its soft-rot phages technology by undertaking new pilots where they can prove to farmers and logistic companies the effectiveness of their formulations as an alternative to chemicals. This will also demonstrate to them the resulting savings and profits that they would enjoy shifting to phage-based solutions.

They are continuing to add more phages to their database as they become available. As a platform technology company, their vision is to extend their product line to target other important bacterial diseases in agriculture and aquaculture.

COMBio’s product and phage platform is easily scalable and can be extended to emerging plant diseases aside from the existing ones. So, their product is not only off the shelf formulations, but also those which can be tailor-made to existing or emerging outbreaks at farms and stores.

COMBio’s Founder, Sivachandran spent his years at university working on farms. It was through this experience that he realized that farmers are among the most vulnerable sectors of society. They work all day in harsh conditions and rely on the use of toxic chemicals that can lead to sickness and even death. On top of this, threats like climate change, war, and pandemics have made their business extremely volatile – affecting their own livelihoods, as well as those of everyone who rely on agriculture and food daily.

He realized that “if there is even a tiny opportunity to make farmers’ life easier, we should go full gas with that”. That’s why he decided to dedicate his career to solving the challenge of post-harvest losses. With COMBio, his goal is to guarantee a more significant income for farmers while reducing the amount of food waste generated annually – a win-win for farmers, consumers and the planet.

He met the rest of his team while working at the Center of Excellence for Omics-Driven Computational Biodiscovery – aka COMBio – a research center started in 2017 thanks to a collaboration between AIMST University Malaysia and the University of Copenhagen. The Center’s primary goal is to drive decision-making in agriculture using computational tools and AI, and the work they do is funded through bioinformatics analysis services, workshops, and several national and international grants secured by the team.

In 2018, Sivachandran and the COMBio team spun-out from the university in order to dive deeper into phages and their utilization in agriculture. They have now grown to be more than 10 people – mainly post-docs from AIMST University – who represent diverse skill-sets: from plant biologist, biotechnologist to AI experts. COMBio also works closely with a team of advisors from academia and leading industry players.

As Sivachandran says: “we think food loss and waste is one of the world’s most serious problems – and we are here to solve it. We have the vision, we have the science, we have the perseverance. COMBio will revolutionize agriculture!” 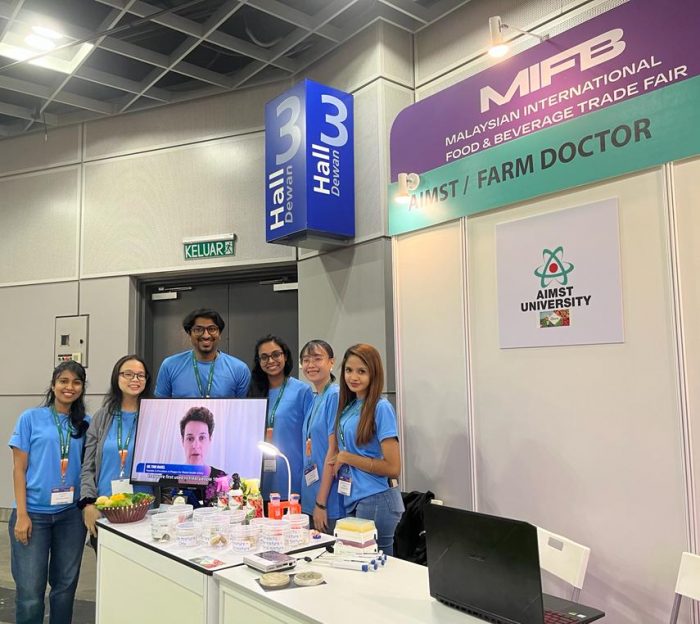 The COMBio team is now focused on acquiring more pilot projects in Malaysia and India to test the impact of their products on farms and in the supply chain. They aim to test their solution in different environments for the next two years to establish a reliable protocol, from scanning the soil samples to advising for the best phages to combat dangerous microorganisms.

They also continue to build out their soil phages by analyzing and scanning more acres in the region, with a goal of accelerating the transition towards a more resilient food and agricultural industry.

COMBio is now participating in the TFF Academy, our personalized start-up acceleration program, where they are developing their business model, go-to-market and fundraising strategies, and storytelling. We are also introducing them to relevant industry contacts and helping them build the product roadmap for the next few years.

They will be showcased at TFF’s 2022 Challenge Finale and Demo Day on December 8th. Register to take part here: bit.ly/tffdemoday2022

If you want to find out more about COMBio, partner with them, or meet the team, please reach out to Elia at elia@thoughtforfood.org.