Dear TFF Community, We have been closely monitoring the farmer protests in India over the past months. We have been connecting regularly with our TFF Community members across the country to hear their perspectives and insights, and to learn more about this complex issue and its impact on the country’s farmers and on the agricultural and food sector as a whole. This blog has been prepared by two of our TFF Ambassadors in India who wanted to share more information about this situation, why it is important for all of us to care about, and what we as change-makers can do about it. We understand there may be other perspectives about this topic that may be missed in this article. We invite an open and ongoing constructive dialogue, and invite you to join us for an “Open Conversation” live session on Zoom. Register for the session on March 11th at 6PM IST.

Over the past few months, the voices of the farmers at the Singhu Border have echoed far and wide. This is the largest protest in human history. Their dissent is being discussed world over, grabbing headlines of major media and the attention of Hollywood celebrities. But why are these farmers protesting? Which laws prompted their protests? Why is it important to talk about it, and what is the road ahead?

What the protests are all about?

In September 2020, three agricultural laws were passed in the Parliament of India. Though the government suggests that these three bills are intended at empowering farmers, there has been a huge controversy and backlash over these laws. The farmers, particularly those of northern India, have opposed the laws since their inception. This is the cause of the on-going farmer protests, which are mainly happening in North India.

What do the laws suggest?

India’s agricultural sector relies heavily on the Agricultural Produce Market Committee (APMC) markets (mandis), which are regulated agricultural markets, and the primary markets where farmers sell their produce. These mandis were established by state governments after Indian independence to protect the interests of famers who were often extorted by money lenders, and as a recognition for the challenges farmers face such as low prices, high marketing costs, and risk of losing the quality of their produce in the agricultural marketing system.

The APMC mandis are important because they provide a means for all kinds of farmers to trade their produce without the fear of being exploited. The government regulates trade in the mandis and levies taxes, while farmers trade their produce under regulations that helps to avert any deceit. Each state operates APMC mandis, and farmers are required to sell their produce via auction at the mandi in their region. Traders require a license to operate within a mandi. Wholesale and retail traders (e.g. shopping mall owners) and food processing companies cannot buy produce directly from a farmer.

There are three new laws that have been introduced, which aim to open up the agricultural market and facilitate trade outside the regulated mandis. They promote inter and intra state trade, remove barriers, and provide for electronic trade of agricultural products. With the new laws there will be no market fee or penalty when trading outside of the APMC mandis.

The first law that was introduced is the Farmers’ Produce Trade and Commerce (Promotion and Facilitation) Bill. This facilitates trade outside the regulated mandis, and anyone with a licence has the legal means to trade with these farmers. This trade will be free of the mandi tax imposed by the government. 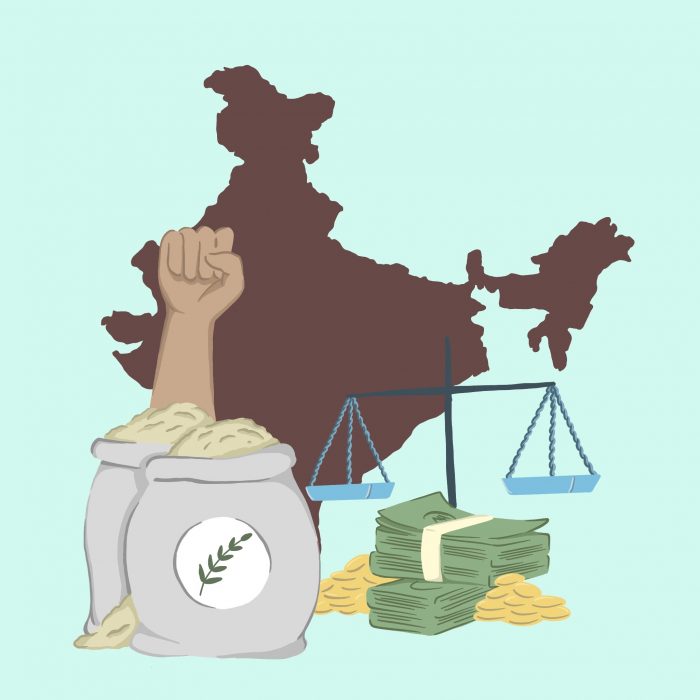 Why are they deemed contentious?

The new laws have been positioned as opening new economic opportunities for farmers. The problem is they don’t provide the social and economic protections that farmers have had, and want . Mandis have played an important role in India in guaranteeing a minimum support price (MSP) for farmers, who, as mentioned above, face high-levels of uncertainty and risk.

The MSP provides an important social security measure for the farmers of India, as their crop yields and prices tend to fluctuate rapidly. The Government procures about 23 crops from farmers at MSP, including rice and wheat. Protests have been particularly strong in Northern India, where rice and wheat are primarily grown. Critics view these laws as a means not only to dismantle the mandi system, but also to discontinue the MSP, and the social protections that protect the economic viability of farming and the livelihoods of farmers.

The laws also facilitate and promote contract farming, which means that multinational corporations can procure their products directly from growers. However, the laws do not prescribe a mechanism for the regulation and fixation of the prices offered by these companies. Farmers are concerned that they will be exploited, and that the private sector actors will have unrestrained power to fix prices. They also worry that if this happens, they will not have the legal resources to organize themselves against the corporate interests, making them vulnerable to exploitation with no protection.

The easing of the restrictions and regulations on stock limits has also raised speculations over the hoarding of farm produce by agri business owners and traders and deliberate attempts to increase their price. This has led to concerns over food security.

It is important to note here that though the constitution provides for the Centre’s intervention in agriculture, agriculture has traditionally been a state issue in India, with the states calling the shots most of the time.

What are the demands of the farmers?

The prime demand of the farmers is the repeal of the three agricultural laws which they deem as not only arbitrary, but harmful. Another predominant demand is a written assurance that the MSP will continue to be upheld. In order to achieve this, farmers have been protesting at the Singhu border (near Delhi) the last few months. This is the largest protest in human history anywhere in the world, with approximately 250 million people involved to date.

What has the government done?

The union and the farmers have held many talks. The farmers raised another issue with the penalties that were levied for stubble burning – in this case, the government and the farmers reached an agreement and farmers were exempted from the stubble burning penalties. However, this was a minor issue. The major issue where no resolution has been reached yet is around the above-mentioned farm laws, which are still being hotly debated. So far, the government has provided an oral assurance that the MSP will continue (the agricultural minister has stated that they are ready to give a written assurance for the MSP), and there has been a suggestion for taxation of private mandis and traders along the lines of the APMC mandis. The government has also assured the farmers that they will not be exploited by the changes. It has said that the measures will be taken to ensure that there are no discrepancies in the contract farming so that the farmers’ interests are protected, and that they could approach the civil courts in case of dispute resolution, which wasn’t a provision earlier . The farmers are vehement in their demand for the repeal of the laws and demand a written assurance for the MSP. So far, the talks have been inconclusive since the government has suggested “alternatives to the repeal of the law’’, whereas the farmers wish for the laws to be repealed completely.

Latest update on the protest

The farm unions have rejected the amendments proposed by the government since they are not yet assured of the corporate trading framework. As mentioned, they fear that their income will plummet since the corporates have an upper hand. There is also continued scepticism around the MSP and trade outside the mandis and so the farmers wish for the government to repeal the laws entirely. Gita Gopinath from the IMF has also stated that though the farm laws have the potential to improve the industry, a framework for social security of the farmers needs to be looked into. The protests have largely been peaceful, apart from instances of violence by a certain sect of farmers on the Republic Day, which was condemned by farm unions and the government alike. Controversy has been raging around the actions taken by India after the violence. These protests were catapulted onto the global stage when celebrities around the world voiced their support for the protests. Some celebrities within India felt that it was not the place of global celebrities to comment on the situation.

In January, The Supreme Court of India stated the implementation of the controversial farm laws. It suggested the setting up of a panel to address the deadlock.

Though these protests are ensuing in India, they have a global impact. Apart from the concerns raised globally over the human rights violations with regard to the protests, the protests can also impact global agricultural trade. In a globalized society, all actions are intertwined. India is one of the largest exporters of cotton, spices, basmati rice, and other crops. These protests and the deadlock between the farmers and the union could directly impact the international trade of these commodities. These protests could determine important decisions and laws on support prices, opening up of the agricultural sector, regulations on hoarding etc. which not only impact the present but also set a precedent for the future of agriculture and labour – in India and in other countries around the world.

Like all issues facing agriculture, the topic of the Indian farmer protests is complex with a lot of nuance. There are no easy answers. It is important to consider all of the perspectives and reasons why people feel the way they do – to empathize with them, and also try to find solutions that address the prevailing issues. In this case, we do see that innovation has the chance to play an important role – it can help provide transparency in the agricultural market. But technology alone won’t be enough to solve this, it needs to be introduced in the right way to ensure farmers benefit. We look forward to continuing the debate with our TFF Community in India and globally – and to find solutions – technology, policy, business – that help us to achieve our ultimate goal of building a better, more inclusive food system that is healthy for people and the planet.

To learn more about the farmer protests, check out the links below.

We invite you to join us for an “Open Conversation” live session on Zoom on Thursday, March 11th at 6PM IST to have a constructive and open dialogue featuring speakers who are on the frontline of the farmer protests.