As things are getting crazy on planet earth, space colonization seems more relevant now than ever and GrowCab has a solution that moves us one step closer to interplanetary living. 🚀🧑‍🚀

GrowCab is a flat packed, growth cabinet designed specifically for speed breeding. It aims to conduct the research required to determine the optimal conditions in which to breed different crops. GrowCab won the TFF x Beta.Space Space Colonization Challenge. This topical prize challenge aimed to incentivize change makers from around the world to think beyond the food systems on Earth and help develop the required innovations for sustainable living on other habitable worlds.

The GrowCab team explained their motivation: “When you start thinking about space in a certain way, by focusing on the needs, challenges and opportunities, you start to realize that they’re very similar to those we face here on Earth. If we can apply this in space, then we absolutely have the power to apply it in places where we need it most here on Earth.”

Speed breeding relies on optimally controlling the plant’s stress to accelerate its metabolism without killing it. Each crop variety has a different response based on variables such as light, temperature and humidity. Ultimately, speed breeding has the potential to introduce rapid variation into breeding programs, which helps develop high-quality crops with maximum yield. Unfortunately, it is quite expensive to rent these growth rooms, and access to such facilities is already limited. By scaling down to several small machines, each one with slightly different parameters, one can find the optimum and stay within budget. GrowCab is designed to control all parameters in a similar way to glasshouses and controlled environment rooms. 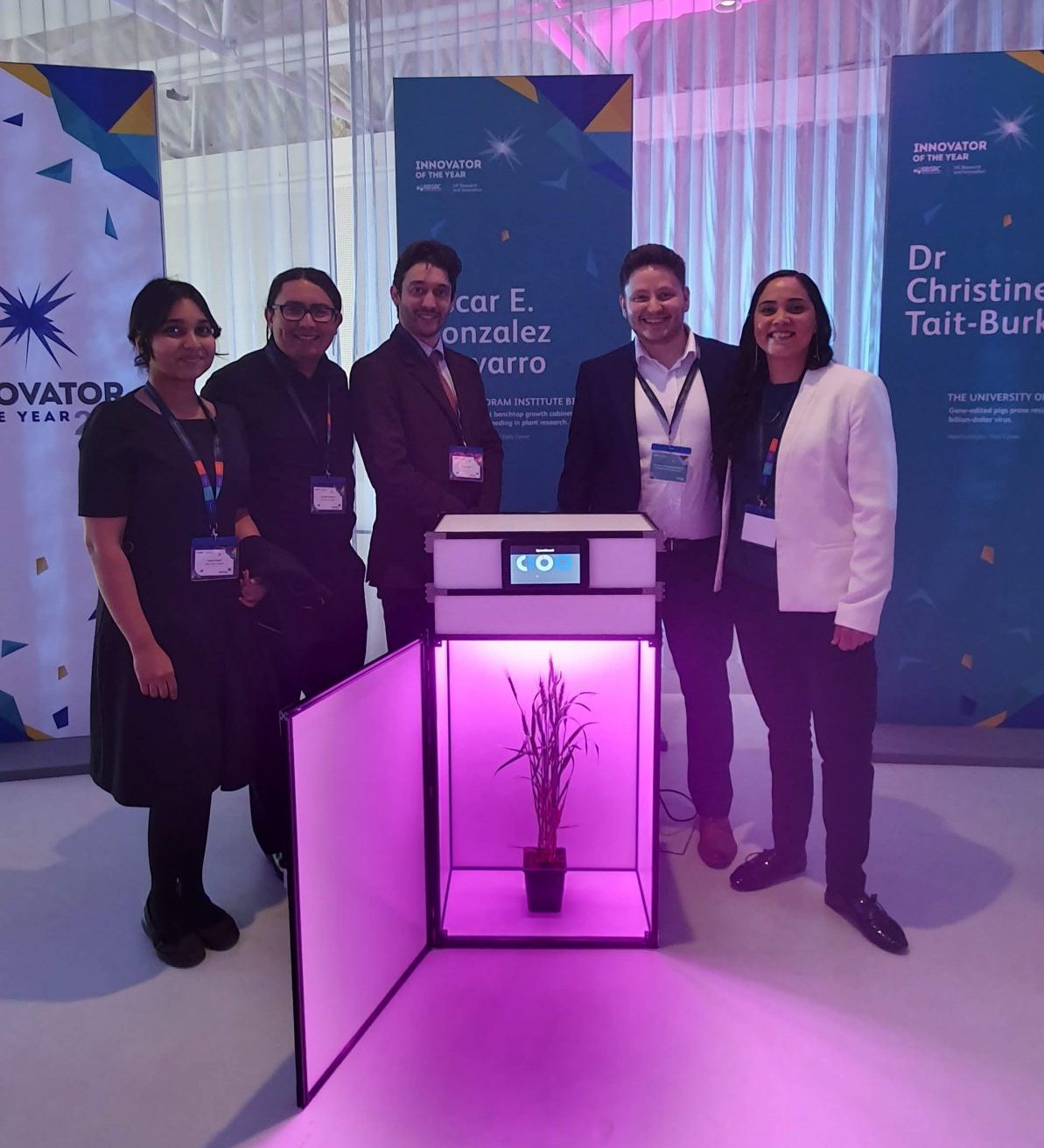 The idea materialized into a prototype a couple of years ago. Our team is from Mexico, India, and Venezuela, and we all shared our mutual frustration over how difficult it can be to gain access to research facilities.

Frustration led to action and we decided to build a smaller, cheaper version of a speed breeding walk-in growth room. We believe that the ingenuity of GrowCab justifies a wide distribution. It represents break-through research that can help breeders to develop crops resistant to diseases, stress due to changes in water availability and temperature, ultimately improving the yield for farmers.

We scaled down the technology to democratize it.

Think about low-income countries where breeders and scientists don’t have open access to these facilities. Their crops continue dying because of climate change, we really want to break this bad data gap. Farmers in these countries are reliant on seed which has been developed and multiplied in national breeding programs, which in turn rely on access to the latest technologies to build resilience and growth into the seed via genetics. Unlike large private seed companies, national programs generally don’t have the capacity to access the kind of money to buy and build such infrastructure. Don’t forget: some crops that perhaps aren’t economically advantageous for companies are never going to be the focus of research because they’re not sufficiently profitable. We want to prevent this from happening, we want to give farmers with limitations an opportunity to test orphan crops for breeding.

Who makes the GrowCab team and what are your backgrounds?

Sreya is a biotechnology engineer from India, she is the expert on speed breeding in our team. She co-developed the technique with collaborators in Australia, which was then published in the Nature Plants journal, and has seen pivotal research outcomes. Oscar is a biotechnology engineer with a Ph.D. in plant genetics. Originally from Mexico, now working in the UK, he’s covering the hardware part of GrowCab. Ricardo is a computer scientist and data analyst in bioinformatics. Also born in Mexico and now living in the UK, he is in charge of developing the GrowCab software. Marcela is also a biotechnologist from Mexico, now located in Denmark, who studied environmental science in sustainability, focusing on biofertilizers and the reduction of water consumption in agriculture. Luis, who is working as a software developer at the Earlham Institute, is originally from Venezuela and has developed the GrowCab front-end which allows users to configure and interact with the cabinet.

What is your ultimate potential?

We have two different targets: putting this technology on Earth, as well as on other habitable worlds. It’s quite streamlined since the same instrument allows us to achieve both. If we can make the growth chamber efficient enough to succeed in space, then we will be well-positioned to democratize the technology on Earth. It’s important that the tools being developed around the world reach not only scientists but also the farmers that are doing their own breeding. The ultimate benefit is that this cutting edge technology unlocks our potential to get a hold on orphan crops, and open-sourcing it, especially in underserved places where it’s critical to have advancements in plant breeding, holds huge promise in tackling food security.

It is what they’re going to eat the rest of the year. Ultimately, we recognize that the technology that we will develop to put the cabinet in space is quite useful in the global south, for example in parts of Mexico or Africa, where energy supplies are unreliable or even non-existent. The same cabinet that can go to space can also be used in certain countries, so we are taking advantage of all the funding that is there for space research and circulating it back to Earth.

What is your next big goal?

Our next big step is to move from prototyping to proof of concept and then onto an actual product. If at some point we can include biofertilizers in our cabinet that would be amazing because although fertilizers have improved the quality of life of many people worldwide, some farmers still can’t afford them and even with access to chemical fertilizers there is the associated pollution problem. So, why not look at the natural look of bacteria that are performing that service already and make use of them? We want a clever company that always goes back to science and continues to improve the product.

We’ve grown a lot in a short period of time, it’s surreal. It’s been an amazing experience. Sometimes it feels like we started in the opposite way, most startups have the idea, and then they build the product, we already had a working prototype. We learned how to run but now we need to learn how to walk. It’s difficult for us to go from a working prototype back to the initial idea and ask ourselves: What is this? What is our market? What is the nature of this product?

Our biggest challenge at the moment is finding spare time. We all have our own projects in our research centers. TFF has provided us with resources, knowledge, and a network that we are using to our advantage.

We will continue sharing about GrowCab—make sure to follow their journey here.

GrowCab and the other Topical Prize Winners, Finalists and Boost Teams are currently taking part in the virtual TFF Academy 2020, which is an open-sourced acceleration program anyone can join. Just sign up to the Digital Labs and make sure to request to join the TFF Community Facebook group here where we will keep an active feed for peer-to-peer discussions and relevant conversations!