Lobster meat is a sought-after luxury food that boasts a hefty price tag, keeping it out of reach for most people. In 2021, lobster prices skyrocketed due to constrained supplies and increasing demand from consumers heading back to restaurants. Additionally, the Gulf of Maine, home to the majority of the world’s clawed lobsters, is warming faster than any other body of water on the planet – and depletion of these animals, and others in their habitat, is a real possibility.

What if this delicious and healthy source of protein could be affordable and accessible to everyone? And even better, what if this could be possible without impacting our oceans, without destroying the livelihoods of fishermen, or without depleting these beautiful species?

Meet Cultured Decadence, our 2021 TFF Finalist team from the USA. They are on a mission to create the first cell-cultured lobster meat through cell culture and tissue engineering. In doing so, they want to support an industry that is acutely aware of climate change and warming oceans and is seeing livelihoods vanish. Cultured Decadence also wants to create novel culinary experiences that allow more people to enjoy lobster without negative impacts. Imagine a 10-pound lobster tail with the butter already inside!

Even with government regulations in place, commercial fishing can have detrimental impacts on ocean life and, thus, the livelihoods of fishermen. Sadly, global warming is driving marine life to extinction, including the North American lobster population which could be in serious trouble by 2100.

The vast majority of the world’s clawed lobster is harvested from the North Atlantic in a zone called “The Gulf of Maine” – and mainly in the state of Maine in the USA up through the Canadian Maritime Provinces. The lobster industry, which is worth almost $6 billion globally, faces extreme hardship from rising water temperatures and increasing ocean acidification. In Maine, lobsters are becoming harder to find as they relocate to other waters – waters that are farther from shore. This makes the lobster harvest more ecologically intensive and harder for family-run boats to participate in.

While there is a growing demand for lobster globally, regulations limit the number of lobsters being caught and a the number of licenses issued to lobstermen. Lobstering is becoming a limited-entry fishery, and there is a long waiting list to get a license in Maine. Adding fuel to this fire, farm-raising lobsters is not an economically or biologically viable option, meaning all are caught in the wild. Looks like we really don’t have many options here…or do we?

The name “Cultured Decadence” pays homage to several parts of what the team does: culturing cells from animals to make meat, having the meat coming from decapods, and because lobster and seafood is a decadent food experience – that, thanks to Cultured Decadence, will soon become more widely available. Cultured Decadence is not just recreating lobster meat though, they are producing an entirely new ingredient and revolutionizing the way we will eat crustaceans.

“What if we could give you the tail meat texture, consistency, flavor and taste but in a medallion shape. Maybe that’s a little bit easier for chefs or consumers to use.” – John

Traditionally , harvested lobster differs in taste and texture depending on what part of the lobster is consumed: the tail meat is different from the claws. But Cultured Decadence is form-free. That means they could produce claw meat in medallion shapes, create tail steaks, or even meat in a cube shape. What else is possible? Cultured Decadence  has the chance to become a veritable Willy Wonka of the crustacean industry!

The faces behind cell-cultured lobster 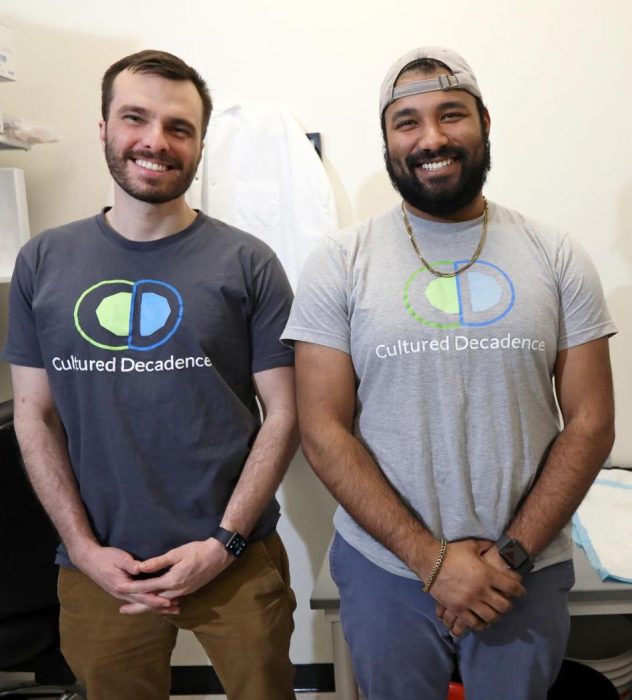 John and Ian are the co-founders of Cultured Decadence. They met down this road for different reasons.

John Pattison joined the cellular agriculture movement after he tucked in a burger and only later found out that it wasn’t a beef burger at all, but actually it was a plant-based burger! John saw the possibilities that alternative proteins will offer consumers, the benefits of this technology go far beyond tastebuds as it makes food production more sustainable and responsible. Understanding this impact, John set out to become part of the industry. Before co-founding Cultured Decadence, John was the Director of Operations at another cell-cultured meat company focused on pork. He also serves on the Board of Directors of New Harvest, the leading non-profit research institute dedicated to advancing cell-cultured meat technologies. John is a veteran of the US Army and received his MBA from NYU Stern.

Ian Johnson grew up in a vegetarian household and was aware from an early age that meat had a big environmental impact. He is a molecular biologist who was a Scientist at Finless Foods, a cell-cultured meat company focused on bluefin tuna, before co-founding Cultured Decadence. Prior to Finless Foods, Ian worked at two clinical-stage companies giving him experience in the cell-cultured space. Ian shifted his work to the cell-cultured meat space because he wanted to solve hard problems that have huge impacts on our environment.

John and Ian bonded over their love of golf and good food while both were living and working in the Bay Area and in 2019 they decided to found Cultured Decadence, the first company in the world focused on creating cell-cultured lobster! The team at Cultured Decadence is aiming to eliminate supply chain inefficiencies and waste by focusing on producing the end product, lobster meat. Imagine mercury-free, microplastic-free, shell-free, highly nutritious, and completely delicious lobster, all at a lower cost than traditionally harvested lobster meat! On top of it all, the Cultured Decadence team is proud to be creating lobster meat in an unexpected place: Wisconsin, the landlocked state in the Heartland of the US, 1000 miles from the nearest ocean!

It’s a powerful advantage when you share a common goal 🎯

Cultured Decadence wants to bring others along on their journey and so they are collaborating everywhere they can. They are talking with chefs, lobstermen, researchers, and other cell-cultured meat companies. They want to make nutritious and delicious lobster meat available to more people in more places, so those living far from the sea and those who currently can’t afford it, can also now enjoy this nutritious and sustainable cell-cultured meat choice.

Building relationships with existing industry and researchers is key to fulfilling the demand for lobsters in a sustainable way. You might not guess it given their gourmet reputation, but not much is known about lobsters, and the scientific community working to learn more about these fascinating animals is as-of-today very small. Because lobsters are not very well studied, what Cultured Decadence is doing is groundbreaking for the scientific community as well. The team is keen to collaborate with academia and to share their findings with other marine life scientists, advocates, and conservationists.

TFF is working with Cultured Decadence to help them communicate their story, their impact, and their view for the future of this industry, while also supporting them with pitching, business strategy, industry introductions and stakeholder engagement.

If you want to find out more about Cultured Decadence, or if you want partner with them or meet the team, please reach out to marie@thoughtforfood.org.

The TFF Challenge 2022 is calling on innovators and entrepreneurs at every stage. Follow in Cultured Decadence's footsteps and develop a successful solution with us.