Shafinaz’s story, along with those of Samiha, Rubyat, and Lamia, is unique. As self-described “city-girls” living in Dhaka, they have been drawn to an industry that employees nearly 50% of the Bangladeshi labor force — Food & Agriculture.

We wanted to find out why they are so dedicated to this industry, and share how they have made it their personal mission to position Bangladesh as a leader in sustainable food production. From creating the 2015 TFF Challenge winning concept FoodFresh, an affordable cold-storage bag, to working with USAID in Bangladesh, you can read their story below. If you want to connect with them to collaborate on the great work they are doing, feel free to email shafinaz.hossain@gmail.com.

My childhood was very ordinary, and similar to most other kids in Dhaka. I have always been a city girl, but occasionally my dad would take me out to his village where he grew up. It was there that I noticed the vast areas of agricultural land — where men, women and even children were working in the fields — and the beautiful produce that would be gathered under a tree after a good harvest day. At that point, farming was just something new that I learned about, but I do remember being surprised at how there were never any new machines or technology. Year after year it was the same set of people, working from dawn until dusk, in almost exactly the same way.

As I grew up, my trips to the village became less frequent and I fell out of touch agriculture. But in the back of my mind I always wanted to do something to improve the lives of the people who bring food to my plate. When I entered into my university days, I found three other girls who shared the same passion and it was then that we co-founded our project, FoodFresh! 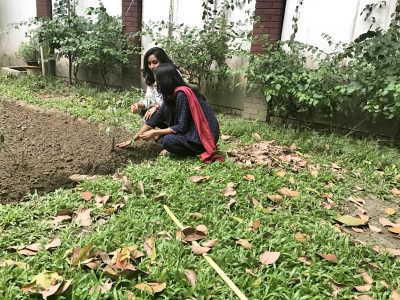 Samiha, Rubyat, Lamia and I first met when we were in a group for a course where we had to go scout business opportunities in rural Bangladesh. It was during that trip we became serious about doing something for the post-harvest losses in agriculture. We started looking at different research papers on the internet and engaged an engineer to work with us. Then one day Samiha came up to us and told us about Thought For Food, and of course, we immediately agreed to participate. The reason we wanted to join was because we wanted to connect with the right people who would understand our potential and help us with our project. TFF did exactly that for us, and so much more!

After winning the 2015 TFF Challenge, FoodFresh became even more real — and for the first time our idea was just not an idea but a substantiated vision. People were starting to listen to our lofty take on overhauling the agricultural scene of Bangladesh. FoodFresh became the number one priority for us.

Up to now, we have been making many different versions of the cold-storage bag, utilizing lean startup methodology to iterate versions of the product with direct feedback from our customers. However, it is just not the FoodFresh bag that we have to consider. Once produce is stored in a cooling unit, it has to be kept in a constant cold chain system until it reaches the consumers. Otherwise, the produce risks accelerated spoiling. Thus, cold storage needs to be incorporated into the transportation system as well, which is now absent.

Right now, we are focusing on improving the efficiency of the FoodFresh bag. While that is in development, we have been building a network of people in Bangladesh that we can work with to create the changes in the food and agriculture market system to make it easier for future aspiring entrepreneurs.

Because of our work with FoodFresh, we were approached by USAID themselves as they came to know about us through an article published in one of the area newspapers. We started to work with them to assess the market for FoodFresh, and were surprised when they offered us all an internship. From there, we all received full time job offers!

At USAID, we try to address many agricultural challenges by improving Bangladesh’s economic stability through enhanced food security in Southern Bangladesh. We use the market systems approach to ensure real and durable change that will lead to increased rural incomes, rural employment, and more inclusive systems. We work with private firms to improve their strategies and business practices, making them more competitive and sustainable in the system and driving them towards a direction that would lead to the economic development of Bangladesh’s agriculture.

Currently, we are all working as Associates in USAID’s Agricultural Value Chains Project, and we are mainly responsible for commercializing agro technologies, developing the entrepreneurial scene, and bringing systemic changes within the various crop value chains that we work with. We work in different teams of the organization which gives a very holistic idea about the different phases in the agriculture sector. The work here helps us talk to the stakeholders in the agriculture sector which in turn is helping us build our own network for FoodFresh and giving us a pragmatic view of entrepreneurship in agriculture.

Our experience working with USAID, along with that of FoodFresh and Thought For Food, has led us to realize that collaboration is the key to achieving our goal of feeding 9+ billion people. We have been connected to individuals from around the world that share this common cause, and we can’t wait to show them that Bangladesh is a leading country in this movement.

Collaboration is the key to achieving our goal of feeding 9+ billion people.

Hi readers — this is Jared again! We wanted to share some quick updates on what FoodFresh has been up to since they won the Grand Prize at the 2015 TFF Global Summit in Lisbon, Portugal.

FoodFresh, formerly Innovision, winning the 2015 TFF Challenge.
Since then, they have…

FoodFresh is calling on the TFF Community to help them reach potential collaborators. Their network from USAID is allowing them to meet many exciting and relevant players in the Bangladesh agriculture space, and now they are looking for the innovative thinkers and investors to help them bring a cold supply chain to farmers and consumers in Bangladesh. If you have some ideas on how you can help them achieve their vision of making Bangladesh a leading agricultural producer, email shafinaz.hossain@gmail.com.

Lets spread this story, and together create a more food secure world!