I learnt in high school that fungi are champions of decomposition and recycling organic matter. But it is only recently that I actually learnt about the incredible role fungi has in the carbon biogeochemical cycle. This was due to the insightful film screening of ‘Grassroots’, organised by TFF Australian Ambassadors, and followed by a Q&A with the film’s feature agronomist, Guy Webb.

Grassroots made it clear that soil is the most important terrestrial carbon sink as 80% of carbon in terrestrial ecosystems is stored in our soils. Soil fungi are the main regulator of this process. As decomposers, they produce organic materials with very long residence times in soil. Symbiotic fungi which colonise plant roots exert major control on the global carbon cycle. Despite its importance, fungi have not drawn the attention and hype that its powerful sequestration ability would suggest. In a time of damaging, worsening climate change, there has never been a greater need to appreciate fungi’s potential. As the film stated: “powerful knowledge nearly slipped through our fingers”.

🔬 The science behind the biological phenomenon

The film explained that mycorrhizal fungi can sequester carbon in the soil by assimilating carbon from the atmosphere in their hyphae. The scientific mechanism behind this is driven by the fungi’s symbiosis with plant roots. Fungi augment the removal of atmospheric CO2 from their plant hosts and use it to build the hyphae which extend into the soil. Long term, this can offset the release of GHGs to the atmosphere. A study in Sweden indicated that 50-70% of carbon bound in soil is from tree roots and their associated mycorrhizal fungi. With mycorrhizal fungi being such important components of the microbial community in soils, changes in their abundance could therefore have global consequences.

🍄 Fungi and a changing climate

Climate change and extreme weather will be the main driver of changes in abundance. Fires, like the ones in early 2020 in Australia, alter the ability of mycorrhizal fungi to sequester carbon. Fires reduce fungal abundance as dead fungal tissue decays faster in fire-affected soils. Climate change therefore poses a serious risk, as the expected increase in fire activity will lead to a decline in fungal contributions to soil carbon sequestration.

A recent global assessment shows that these fears are becoming reality, finding that human impacts have greatly reduced plant-fungal symbioses. Vegetation clearing has affected the distribution of mycorrhizal fungi. A study published in Nature Communications showed that the loss of ectomycorrhizal symbiosis reduced the amount of soil carbon sequestration in these ecosystems. This is the first study to provide a global accounting of mycorrhizal symbiosis distributions. It was found, despite the loss of symbioses, that ecosystems with mycorrhizal vegetation stored 350 gigatons of carbon globally, compared to 29 gigatons in non-mycorrhizal vegetation. Restoring these ecosystems could have a significant impact on climate change abatement.

🌍 “The largest climate army on Earth”

Guy Webb explained that there are 530 million farmers across the world, collectively managing half a billion hectares of land. A wealth of knowledge already exists to show the potential for agricultural soils to sequester carbon, and as primary carers of the soil, these hundreds of millions of farmers can take the lead in fighting climate change.

After attending a lecture on melanised endophytic fungi, Webb was inspired by fungi’s potential and the fact that “the largest terrestrial carbon sink on the planet is managed by the largest climate army on Earth [farmers]”. Webb’s plan is to commercialise fungi inoculum which farmers can apply to their plants, similar to the way that rhizobium is applied to crops for nitrogen fixing. Addressing the permanence of the issue, Webb explained that he is focusing specifically on endophytic fungi because it can lock carbon into the soil long-term and prevent it from re-entering the atmosphere, given that fungal hyphae is small enough to absorb carbon. 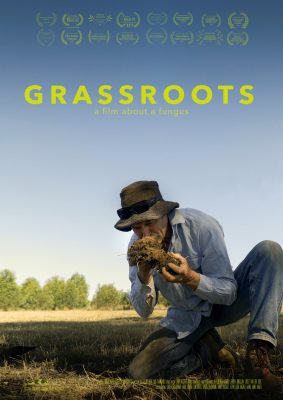 Webb pitched his soil sequestration idea during a TEDx event in Sydney. He spent days practicing his pitch and condensing it to 30 seconds, using his family as his main sounding board. He won the pitching contest, having received the most audience applause for his pitch to support farmers become “carbon capturing superheros”.

Why isn’t this technology being used everywhere, by everyone?

Despite the enormous potential, Webb explained that it takes time to get technology validated. Trials and repeated experimentation are ongoing. It is important with any novel technology to understand key metrics and just how much carbon the fungal endophytes can sequester in specific tested environments. Testing in different soils is needed to observe how the endophyte can operate in polar extremes of low or high soil carbon. Only when comprehensive testing across all soil environments is completed will we know the full scale of this technology rollout.

Have there been any updates on the technology since the film?

Since the film was aired, Webb’s idea has taken off at an exponential rate. Webb has established a dual-business model with a mission to pull down as much carbon from the atmosphere as quickly as possible. His company, SoilCarbonCo, is a for-profit start-up which works in parallel with a not-for-profit research institute, SoilCQuest. The dual enterprise has grown to have three labs across two continents. The film was instrumental in reaching out to investor companies which are helping to accelerate the deployment of this technology.

Field trials are occurring all along the coastline of Australia and IP protection is being sought so that Webb and his team can move forward with confidence. The results from these trials have been very promising, showing an average of 15% increase in soil carbon for crops such as wheat and barley.

Are there any risks associated with fungal soil sequestration? Is it just an offset mechanism?

The extensive testing which Webb and his team are undertaking prioritises the identification of any harmful side-effects, such as impacts on microbiomes or plants in adjacent paddocks. The testing ensures that only endophytes which give a positive yield will be applied.

While there is an argument that large corporations may take advantage of this as an offsets scheme, Webb explains that negative emissions technologies are needed regardless if we are to reach net-zero emissions by mid-century.

Has there been any push back from farmers or stakeholders?

The biggest obstacle is complacency amongst some in the agricultural community as to the urgency of climate change. Webb explained that this challenge is overcome by deliberately designing a product with agronomic benefits, such as yield bumps, which will appeal to farmers from a purely economic, business point of view. This economic signal will be very influential in how fast the technology is taken up.

Are there any further areas for innovation?

Ending on a poignant note, Webb stated that we are “only just scratching the surface: of agricultural innovation. Agriculture in 10 years-time won’t look anything like it does now. Integrating nature into agriculture is the way forward for food security and human civilisation.

While a concerted effort is needed to mitigate the worst impacts of climate change, from the energy, transport, and land sectors alike, there is no doubting that fungi are a nature-based solution with the potential to reduce carbon emissions drastically. While it is convenient to put faith in the idea that someone else will solve the climate crisis and adopt the attitude of “they’ll sort it out”, as the farmers in Grassroots note: “we are the ‘they’”.

Watch our recorded live session hosted by the TFF Ambassadors in Oceania.