This is part 2 of the story. Head back to read part 1.

By Shen Ming Lee, Digital Labs Associate at TFF and author of Hungry For Disruption: How Tech Innovations Will Nourish 10 Billion By 2050

All talk aside, one of the most important aspects of commercialization for the cellular agriculture industry is the regulatory framework under which these products will be brought to market. What are the relevant government agencies who will regulate these products? What exactly will be regulated? And how should we label these products?

Brian Sylvester, Special Counsel at Foley & Lardner LLP starts off the panel on regulatory landscape for cell-based foods, giving us a great overview of where the US stands in terms of regulation. He gave insight into how it is encouraging to see a bit more clarity with the USDA and FDA signing an MOU to jointly oversee cell-based foods in March 2019. As is currently the case, the USDA will oversee all meat and poultry products, while the FDA will oversee all seafood products. Specifically for the cell-based industry, the FDA will ultimately oversee pre-market safety of the cell-cultured bioprocess, while the USDA will focus on regulating the processing and labelling of finished cell-based products. Ultimately, the two agencies will work closely together to oversee pre-market safety, manufacturing, labelling, and facility regulation.

Labeling was a huge topic of discussion—one wrought with cattlemen backlash and debate regarding whether cell-based foods can be labelled the same as their conventional equivalents. While organizations like the US Cattlemen’s Association (USCA) have fought for the labeling of beef as cattle that has been traditionally harvested and states like Missouri and Oklahoma have passed laws prohibiting the labeling of meat and poultry for non-conventional animal products, the USDA’s jurisdiction on labeling could ultimately preempt such state laws. How these products will be labelled is essential in shaping consumers’ first interaction with these new products. After all, we wouldn’t want cell-based meat industry to have the same fate at the GMO industry did!

Rohini Banskota, Director of Policy at Finless Foods, spoke of the importance of being open and transparent and communicating with all stakeholders beyond the government to ensure the success of such a nascent industry. She also brought attention to the fact that seafood fraud is something that the cell-based seafood industry will have to contend with when dealing with labeling.

So the conclusion on regulation? There is yet to be a clear regulatory pathway for the cell-based food industry and further clarification from the FDA and USDA is needed. Right now, there are a lot of questions and few answers.

Cellular Agriculture Around The Globe

The idea of cell-culturing food is a universal one. In a panel covering cellular agriculture around the world, the landscape in the US, Canada, Europe, Singapore, Australia, New Zealand, and Israel were discussed. Alex Shirazi, Host of the Cultured Meat and Future Food Show, highlighted the key hotspots in the US and Canada for cellular agriculture activity—San Francisco, San Diego, Boston, New York, Toronto, Montreal, Ottawa, and Calgary.

Jonathan Breemhaar, Lead Automation Engineer at Mosa Meat, spoke about companies like Mosa Meat and Higher Steaks in Europe and how the European culture of being environmentally-friendly bodes well with a more sustainable alternative to meat, especially since many Europeans are still reluctant to become vegans (imagine a Spaniard being vegan…) Ka Yi Ling, Co-founder and CSO of Shiok Meats from Singapore, spoke about how countries like Singapore and Hong Kong are starting to enter the cellular agriculture scene, even though resources for startups in this space is currently somewhat limited.

Over in Australia and New Zealand, Nick Beaumont of Heuros highlighted that the cellular agriculture space is still relatively quiet, with only about three existing startups in the region and governments that haven’t yet established a place for cell-based meat amidst a heavy-reliance on the cattle economy in the two countries down under. Finally, Shir Friedman, Head of Communications at Supermeat, spoke to a thriving cellular agriculture scene in Israel, attributing it to the fact that Israel is such a technologically advanced country and one that has one of the highest numbers of vegans per capita.

A Future Roadmap For Cellular Agriculture

On the subject of future careers in cellular agriculture, Justin Kolbeck, Co-founder and CEO of Wild Type, stressed the importance of people with a non-scientific and non-technical background to fill jobs in branding, marketing, and business development as the cell-based food industry furthers its path to commercialization. According to Kolbeck, building hunger for products, scaling the technology and distributing products, and building a community around these novel products will be just as essential as scientists and engineers in the future of this industry.

The conference ended with two extremely interesting talks to give attendees more food for thought. Firstly, Garrett Broad, Assistant Professor of Communication and Media at Fordham University, provided a multitude of considerations when approaching consumer perception. Instead of building trust through targeted messaging, he challenged stakeholders to go beyond an approach rooted in one-way flow of information, and instead embrace an approach deeply entrenched in fair and ethical practices. He spoke to the downfall of GMOs and how the risk of the cellular agriculture industry facing the same misinformation-driven backlash could ultimately limit its transformational potential.

According to Garrett, building public trust isn’t about PR, it’s about addressing the root concerns of any new industry and about building a collaborative model of trust. He ends by emphasising that we must not let the narrative of the cellular agriculture industry be shaped by those that obstruct the industry (which was the case with GMOs). What resonated with me was his final urge for everyday people to be involved in building public trust and his call for society to move beyond an approach shaped by polarized views, and more towards one that is more holistic and inclusive. 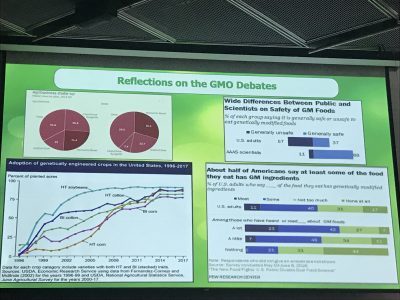 The conference ended with a talk by Neil Stephens, Research Fellow at Brunel University London and a social scientist who has been tracking the cultured meat community since 2008. He gave us a run down of the past 20 years since scientists began working in the lab to make cultured meat, highlighting how a new wave of startups have become successful in attracting financial capital and developing the technology behind cell-culturing food.

Again, more questions than answers. But then again, the exciting thing about the cellular agriculture industry is that we, as a community, get to shape those answers. So, let’s get to work!

With the 2019 TFF Challenge we’re calling on you to tap into the opportunities of the cellular agriculture industry and create more clean and sustainable solutions to innovate in this space. Head over to our Challenge page to learn more and mark your calendar for the launch on World Food Day, October 16th!