According to the UN Food and Agriculture Organization (FAO), agriculture is the biggest water pollutant due to the excess of nutrients from fertilizer runoff and animal manure. This situation will only get worse with a growing population and increasing food demand. The excessive nutrients, mainly nitrogen and phosphorus, flow from fields into bodies of water and spark an excessive growth of algae. The process is known as eutrophication, and leads to toxic tides, lifeless rivers, and dead oceans.

TFF Finalist Team microTERRA from Mexico have developed a biotech solution that cleans agricultural wastewater and extracts the microalgae, which can then be looped back into the system and be repurposed for use as animal feed. In this interview Fanny, COO at microTERRA, shares more about their venture.

Can you tell us a bit more about your venture?

microTERRA is a biotech company from Mexico that combines hardware and biotechnology to develop innovative micro-algae systems. Our bioreactors clean polluted aquaculture wastewater onsite. We are left with clean water and microalgae, which we can be transformed into valuable fish feed and sold back to aquaculture farms. The clean water can also be repurposed for aquaculture fish tanks. With built-in sensors we can monitor the behaviour of the microalgae and generate insights to optimise the process.

Our solution can help prevent downstream and coastal marine pollution in a profitable and environmentally sustainable way.

When microTERRA was founded, the UN forecasted that the third world war will be about water. We found out that Mexico is the sixth biggest producer of aquaculture and that this was our opportunity to solve two major problems:

What are some of your achievements so far?

We have already developed the technology in the lab, filed a patent, and now built our first microTERRA system together with a local fish farmer. Our second system will have a capacity of 50,000 liters, which is ten times the size of our first system.

We have also received grant funding from National Geographic, Echoing Green and Columbia University, and a first investment from Techstars Acceleration program in partnership with The Nature Conservancy – which has been a great validation for our team considering that our business is still in the pre-revenue stage.

Can you share a bit more about yourself and your team?

Our startup was founded by Marisa Cuevas, who has a background in renewable energy engineering. Before joining microTERRA I ran a crowdfunding platform for social and environmental initiatives, where I met Marisa as a client of mine.

We’ve also heard from Marla, Chief of Staff at microTERRA:

When Marisa told me about her idea in the very early stages, I immediately quit my job and joined the team. I studied environmental engineering, analytics and statistics, and went to med school to become a nutritionist. All of my family are entrepreneurs, so I always wanted to build something. The rest of the team has a background in bioscience and biotechnology.

To build our pilot, our founding team lived together in the same house for two months. We were under a lot of pressure and saw the worst and best sides of each other. The team dynamics changed in a very positive way and it helped us to understand when we need to give space to each other. As our team is growing, we will try to keep the strong bonding in our team. 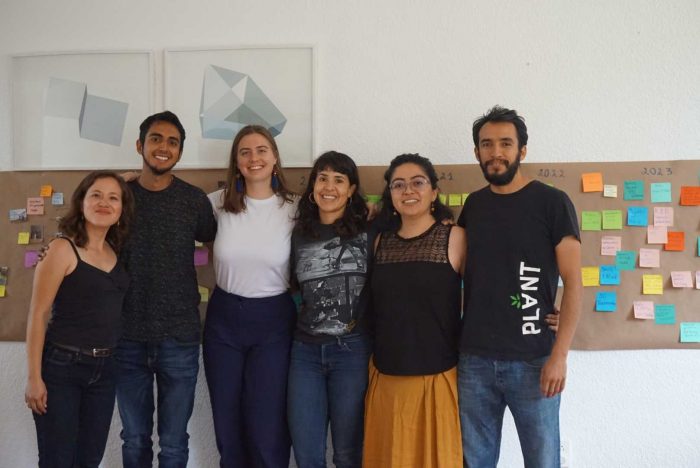 What impact can microTERRA have?

Our solution directly targets the big aquaculture farms but the impact doesn’t end there.

The wastewater that is released from the farms not only pollutes the ocean but also all the downstream ecosystems, so rivers and lakes. The communities living by those waters are directly impacted by the change in water quality.

In Mexico, for example, the beaches at the Yucatan peninsula used to be a tourist hotspot until in summer 2015, Sargassum seaweed accumulated along the shores in the Caribbean Sea. Up North in the Gulf of Mexico, the algae has become toxic, affecting the health of people living there and making fishing there impossible. The microTERRA systems can prevent more areas taking the same fate and help clean up the locations that are already severely impacted by polluted waters.

Could microTERRA expand into other areas?

The output of our systems is pure biomass/ protein. We are currently exploring if we will sell the biomass or if it should be directly produced into fish feed on the fish farm. We are lucky that there is a huge market for microalgae, from basic chemistry to cosmetics, there are plenty of options.

What excites us, even more, is that the microalgae treatment technology can be replicated to all types of animal wastewater, e.g. the poultry or pork industries. The diversification to other types of wastewater would open up the market and we could start producing the protein that could feed all sorts of livestock around the world.

Our two main goals are to launch our second, bigger system and to secure funding by the end of the year that will get us through to 2022. Our long-term objective is to expand microTERRA commercially across Mexico and also launch in other countries such as Chile and Ecuador. We are also considering licensing our technology to local partners which could accelerate our expansion.

How can TFF support you on your journey?

Apart from the opportunity to win a cash prize, TFF gives us access to a community of experts and companies that are moved by the same reasons. TFF is also doing a great job in exposing us to a wider audience and telling our story in a way that drives positive attention to our projects.

The TFF Digital Labs has helped us nail down our business model and tell our story in a convincing way. We are constantly learning and looking for new methodologies that can help us have fast and far-reaching impact.

We’re also impressed by TFF’s partners and mentors, and can’t wait to fully tap into this global network!

We will continue sharing about microTERRA’s journey here—make sure to check our blog regularly!

microTERRA and the other Finalist and Boost Teams are currently taking part in the virtual TFF Academy 2020, which is an open-sourced acceleration program anyone can join. Just sign up to the Digital Labs and make sure to request to join the TFF Community Facebook group here where we will keep an active feed for peer-to-peer discussions and relevant conversations!